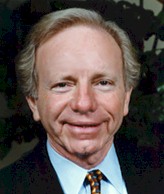 Sen. Joseph Lieberman is refreshing. I am not just saying that because he thinks things are going well in Iraq. It is refreshing to hear a voice from the other side of the aisle that can take a first-hand look at the overall situation in Iraq and give a positive report about progress made and prospects for our success. He obviously was too busy to attend the meeting of other high-ranking Dems where the talking points were delineated: War-for-oil, quagmire, lies and betrayal, illegal occupation, Haliburton, etal; none of these terms were in evidence as Lieberman gave a thoughtful assessment of post-Saddam Iraq.

No, Lieberman was full of good tidings, and that will brand him as a fringe element in his party. Remember: The Democrats have positioned themselves so that good news for Iraq and the U.S. is bad news for them. The last thing they need is one of their own painting a rosy picture of things.

Yes, refreshing. It's refreshing to see a politician who I disagree with on nearly all of his positions and policy ideas, and yet have no doubt that he has the best interests of his country in mind when considering those positions. I actually thought the same thing about Sen. Wellstone. I don't think you could find one thing that we would agree on as far as how this country should be run, but I never had any doubt that Wellstone thought his way was the right way. And he didn't abandon his positions for political expediency.

We need more Liebermans.
Pooped out by The Notorious B.I.L. at 7:42 AM