I'm so glad we had this time together

We've seen a lot of moving about and jumping out of the blogosphere this past year. Foot moved on to infrequent posting at Nihilist, Nihilist to Fraters, Bogus Doug went to Shot in the Dark, King Banananananaiiiiiiian moving around radio stations, etc. As Foot noted early this year, it is hard to thunderblog and have a life with the demanding mistress that blogging can be:

With geometrically increasing work responsibilities, an awesome family and much lower tolerance for exposing myself to the abject stupidity that served as so much fodder for this ThunderJournal over the last 4-plus years, I simply cannot do that anymore.

I'm in the same position, and something had to give. It is with a heavy fart, er - heart that I announce my retirement from Kool-Aid Report (yeah, I'll waffle like Favre). I'd like to thank Foot for the honor of adding me to his stable of awesome spewers of mirth. I really enjoyed the art direction duties of creating banners, buttons and the occasional PhotoShop of Ryan's ass. This one will always be one of my favorites, because it made fellow MOBster Brad Carlson spew diet coke through his nose:

Foot still runs the show here, and I will repeat his invitation to KAR posters:

I'm not shutting KAR down, so anyone who has permissions to post here, may continue to do so.

That leaves Garcia's head, The Analog Kid, and occasionally our dear leader. And there's always the thousands of thought-provoking, coffee-spewing archives from Foot & co. to enjoy (see right sidebar).

The good news: I'm keeping my Twitter account and you can read Foot's and my tweeties in the right sidebar here. Follow me if you dare (some links not safe for work - but I'll warn you. Maybe). 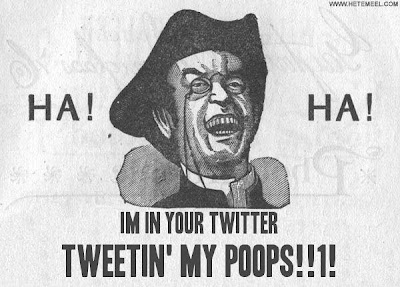 Thanks for the laughs, the comments, and your readership. See you on Twitter.

PS: And don't forget to give generously to KAR's favorite cause: IBD. 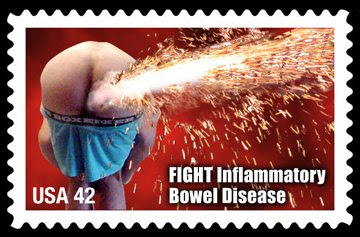 Pooped out by Anonymous at 3:25 PM No comments:

Why Men Get Manicures...

Pooped out by Anonymous at 3:23 PM No comments:

When you're a leftyblog "cartoonist", and even the pantloads at "Talking Points Memo" think you suck...
...then it really is time to suck the pipe, creatively speaking.
Especially when they hate you because you make shit up:

this time around, not all speech balloons from Bachmann are necessarily direct quotes from the woman herself. Paraphrases or new punchlines come in -- and unfortunately, this is not a decision for the better.

Ken "Avidor" Weiner; the best cartoonist in the Twin Cities blogosphere - except for Dan Lacey and Swiftee. And Tiger Lilly. And Sisyphus.
Pooped out by The Head of Alfredo Garcia at 9:19 PM No comments:

I realized I haven't posted on poop in a while. Here's a rec(r)ap:

We got your emissions right here, ANA. I hope passengers all enjoy a Chipotle before boarding, so as to clog the toilets and fill the cabin with anal-charged aromatherapy.

Borrowing and using a catheter during a race should not cause even a wee bit of trouble, meaning that the 81-year-old age-division winner in Sunday's Twin Cities Marathon avoids disqualification, officials said Thursday.

Finally, enjoy this before you head out to Chipotle for lunch. Update: YouTube pulled the link below for copyrights, so watch the clip here.

Pooped out by Anonymous at 9:11 AM No comments:

No Favre Hate in KARville

...unless you're a Packer fan. Vikes won 30-23. Sisyphus' alert graphic hasn't been upgraded yet, but Pack fans are decidedly in code orange: 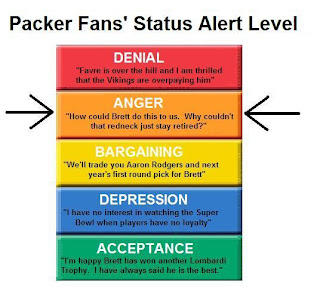 White-hot Favre haters, feel free to pile on in the comments section. Favre fans, pile on the love.
Pooped out by Anonymous at 6:59 AM No comments:

It's also Packer/Vikings game day. Foot's been hatin' on Favre ever since he turned purple. For example, his last Favre alert status graphic:

As a public service, KAR offers our comments section to vent your burning, white-hot hatred of Favre. Of course, it can also as a clearinghouse for Packer hate. We don't care, frankly. Just pile on, you'll feel better.

Pooped out by Anonymous at 10:27 PM No comments: