The News in Haikus

Broken nose, black eyes.
I guess that the puck was seared,
SEARED into his face.

Don't Cry, Heidi, our
Wedding Day was a Prayer for
The Dying. Crazy.

A Coronal mass
Ejection to blast stream at
Earth. Hot gigity!
Pooped out by LearnedFoot at 1:13 PM No comments:

WARNING: THE FOLLOWING COMIC STRIP IS NOT SUITABLE FOR ANYONE.  VIEWER DISCRETION IS ADVISED.

Attention Lefty-Bloggers: Meet the New Guy Who Tells Everybody in the MOB What to Write 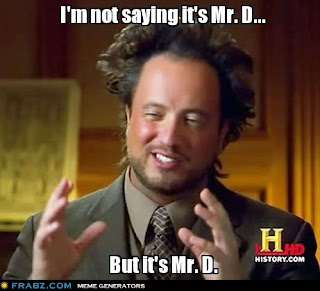 The polls are closed, and for the first time in MOB election history, we have a winner on the first round of balloting.

But first, let us pause to make fun of the also-rans:

We all knew Kevie would finish in 2nd place.  That's because the saying goes "nice guys finish last". There were 4 other guys below him.

STEWART - 12 votes; 17%
I know John to be a great guy, which makes me think that his failure here was that there were many voters who misunderstood the meaning of the "Master of Sausages" moniker.

Early analysis of exit polling indicates the Redwombat, or whatever his name is, managed to vote for himself 7 times.

Early analysis of exit polling indicates that Ben was too incompetent to vote for himself more than 2 times.

And so our runaway winner and new Mayor of the MOB, with 38 votes (53%), is Mr. D of Mr. Dillitant's Dillatantes Dellattante's D's Neighborhood!

It's not hard to see the reasons behind Mr. D's historically successful campaign. [BEGIN TRUE NORTH-WORTHY ACTIVIST INSIDE BASEBALL QUOTE] He had a solid ground game in a low-turnout year, with enthusiastic volunteers phone banking and caucusing with a microtargeting strategy that increased his voter ID efforts.  Lit drop. [END TRUE NORTH-WORTHY ACTIVIST INSIDE BASEBALL QUOTE]

Mr. D may assume the office immediately, wielding his power like a spiked mace made out of nerf.  That's inflatable.

Oh, and he also gets to display this totally copyrighted logo on his site:

There will be a swearing-in ceremony at the Winter MOB Party at that Mexican joint in Roseville on February 25th.  Hopefully that takes place before the recall efforts begin in earnest.
Pooped out by LearnedFoot at 1:23 PM 6 comments:

The Most Important Election of This Generation Month 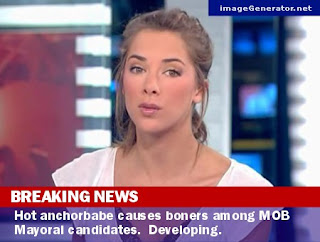 Since it's been a while, let's recap the rules:

1. One vote per computer, per day.

2. Excessive abuse of Rule 1 will be dealt with by the MOB-SOSFL in an appropriate and capricious manner.

3. Polls close Friday. If I remember.

4. If no single candidate gets more than a simple majority of votes, there will be a runoff election next week between the two candidates with the highest vote totals.  No, that's not ranked choice voting so shut the hell up.  Only moron governments use RCV.

Just a reminder that all candidates are encouraged to continue insulting each other throughout the election, and indeed, after its over as well.
Pooped out by LearnedFoot at 12:25 PM 10 comments: 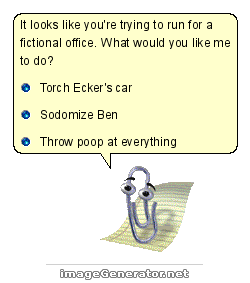 BREAKING NEWS: KAR has just learned that Bobo the Talking Chimp has suspended his campaign for MOB Mayor.  Sources close to the campaign tell KAR that he had an inappropriate relationship with a banana.  Bobo has only released this cryptic statement.

On to the final debate question.

RULES: Candidates may answer the following question in the comments to this post, or on their own blogs with a link back to in the comments to this post. I know the typical KAR reader doesn't fully apprehend the concepts of "leaving a comment" or even general engagement, but I have faith that they will somehow figure it out. Poop fart poop fart booger wiener.  Vagina.

QUESTION: Which ONE (no more, no less)of your fellow mayoral candidates is the least suitable to be MOB Mayor? Please explain why this person would be an embarrassment / pose an existential threat to the art of blogging / just sucks in general.  DIFFICULTY: You may NOT use capital letters, punctuation and the letter 'b'.

Please not that this is the final debate question.  Initial polls will open Monday.  Good luck to all the candidates.  Except that squirrel guy, whoever the hell he is.
Pooped out by LearnedFoot at 12:43 PM 12 comments: 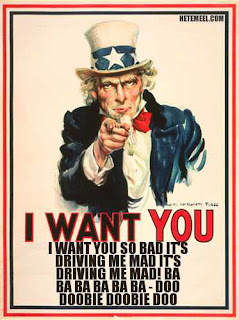 Aaaaaaaaaaaand we're back. Sorry for the delay.
I was going to have a "Rate the Debate" followup to the first question, but I shelved it because a) I think voters should make up their own minds as to who won without input from outside influences who might have an agenda or wish to advance a prefabricated storyline to generate traffic (not that that ever happens in politics), and 2) I didn't feel like writing it.
So let's just say that most polls showed Kevin Ecker taking 2nd place.

RULES: Candidates may answer the following question in the comments to this post, or on their own blogs with a link back to in the comments to this post. I know the typical KAR reader doesn't fully apprehend the concepts of "leaving a comment" or even general engagement, but I have faith that they will somehow figure it out. And no, Ecker, you don't need weapon anywhere in this process.
Please watch the following video:

Anyway, here's the question; a two-parter:

The once stalwart Nihilist in Golf Pants blog has devolved into a cheap (and bad) sports betting advice site. Please answer both of the following:

1) What do you think are the causes of its decline?

2) Would you use the MOB Mayor's power of eminent domain to take the blog?  If so, how would you rehabilitate the property, or to what new use would you put it?